Cut to the Chase with Marshall Masters first aired in 2004 and offers critical interviews with notable authors on topics related to surviving the coming flyby of Planet X / Nibiru and pole shift.

Now on Cut to the Chase 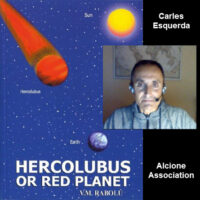 For those of you who may be unfamiliar with the term Hercolubus, it was used by the ancient Atlanteans to describe what the ancient Egyptians and Hebrews called “The Destroyer” and what the Sumerians called “Nibiru.” Today, we call it Planet X, or The Planet X System, since it is a brown dwarf star with planets and moons in orbit around it.

In this interview, Carles and Marshall discuss the changes they’ve seen since 2010 happening to those who follow their work. Surprisingly, both see the same evolutionary process where the topic has evolved from a topic of interest to a topic of concern as the result of increasing Earth changes, weird weather, global politics amongst a range of disturbing issues.

While some would expect a degree of panic to accompany such a change, what Carles and Marshall are seeing is something more profound. A calm shift towards developing the inner self in preparation for the coming Planet X tribulation; an event that will last seven to ten years.

Marshall will also discuss the book he is now authoring, Radio Free Earth and will offer a useful insight into the kinds of popular two-way radios preppers should reconsider as their first choices. 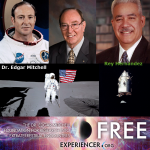 In February of 2008 Cut to the Chase aired an interview with Dr. Edgar Mitchell (September 17, 1930 – February 4, 2016).  A former NASA astronaut,  Dr. Mitchell expertly piloted the Apollo 14 Antares Lunar Lander to a safe landing on Fra Mauro on the moon. Mitchell was the sixth man to set foot on the moon, but the first man in space to experience a profound transformative spiritual event. This was an event that went beyond the science of space travel to a life of purpose not of NASA’s making or control.

Like other notable NASA astronauts, Dr. Mitchell also came forward to tell us that we’ve never been alone and never shall be. What made him unique among this small band of courageous star travelers would be his legacy.  Experiencer.org, the home of F.R.E.E., the Dr. Edgar Mitchell Foundation for Research into Extraterrestrial Encounters.

The world lost a true human treasure with Mitchell’s passing last February, but F.R.E.E. continues on with an active body of retired Ph.D. physicists, Ph.D. scientists, Ph.D. psychologists, Ph.D. neuroscientists and lay researchers. Together they facilitate investigations into UFO-related contact experiences with non-human, intelligent beings and associated paranormal activity. This is all done with a grounded and rigorous scientific foundation that is the first of its kind in the realm of UFOlogy, and one which could very well bring humanity to a completely new understanding of where we fit in the grand scheme of things.

To introduce F.R.E.E. for the benefit of experiencers, and all those with an interest in a truly scientific and noble search for the truth, c0-founder Rey Hernandez explains the methodologies and initial findings of this prestigious effort.  The bottom line is that unlike the self-serving and negative spin we hear from scaremongers, we live in a galaxy inhabited mostly by benign and compassionate races. Join me in this interview with Ray Hernandez and learn the surprising good news — most extraterrestrial encounters are positive experiences.