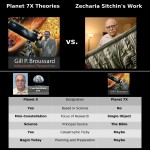 L.A. Marzulli (The Nephilim Trilogy), the host of this Pinlight Productions docuseries, states in his interview with Broussard that Zecharia Sitchin’s book, The 12th Planet, “…put Planet X on the map.”  Marshall wholeheartedly supports Marzulli’s statement, because he briefly knew Zecharia Sitchin, worked with him on several projects, and holds Sitchin’s body of work in high regard.

Given that Sitchin passed away in 2010, Marshall produced this response video in defense of a man who engaged in his life’s work with an unwavering pursuit of truth, no matter where it led, and regardless of how improbable the outcomes were.

Please note, neither Broussard nor Masters are credentialed astronomers or credentialed translators specializing in the ancient Sumerian texts. Therefore, in support of a necessary public debate, Marshall is asking viewers interested in this topic, to download this ‘fair use’ response video and to post complete and unedited copies of it on their own web sites and social media channels.