The Yowusa.com Update series focuses on current data in support of Being In It for the Species by Marshall Masters. At present, worldwide volcanism is at an all-time high.

Likewise, there is a whole range of other disturbing trends as well.  These include increased fireball sightings, an exponential rise in the occurrence of sink holes. Earth trumpets and earthquakes in areas where they’ve never been a concern before.

In addition to this, there are the man-made survival concerns as well, such GMO foods, geoengineering, chemtrails and the potential for a worldwide breakout of Fukushima-scale nuclear disasters.  For those in awareness about Planet X, these are not interesting times.  They are worrisome times and more so by the day. 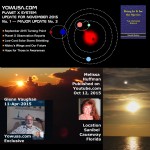 Host, Marshall Masters, offers a detailed analysis of two Planet X observations:  Melissa Huffman’s September 2015 second sun smartphone video captured on the Sanibel Causeway in Florida, plus a Yowusa.com exclusive, an image of Nibiru with wings, captured in April 2015 by digital photography instructor, Glenn Vaughan.  Also Marshall will explain why Glenn Vaughan’s image is deeply disturbing in regard to our future.

Planet X sightings are rapidly increasing and being posted to the Internet.  To help you evaluate these reports, Marshall teaches detailed, step-by-step procedures using freely available software, to quickly rule out sightings of cataloged objects, lens flares, false positives and other aberrations.

Seen something?  Do you want to be taken seriously if you record it?  Learn simple things you can do to make an accurate and credible smartphone video report, so knee-jerk debunkers cannot easily dismiss and trivialize your sincere efforts.

Feeling more unsettled these days?  Yes, the times are rapidly bringing us towards a universal sense of unease.  Proof of this are the daily emails Marshall is receiving from those weary of being led down disinformation rabbit holes with illogical claims and spoofed images.Most importantly, in this video you will learn how to discern the truth without being mislead by Planet X misinformation and disinformation.  In this video, Marshall teaches simple, step-by-step procedures to ferret out disinformation ploys, such as the disillusioning September 2015 non-events.  You will learn how to avoid being ensnared by these orchestrated propaganda campaigns.

Then for those of you building your own survival shelters who are concerned about the need for additional solar storm shielding, you’ll learn a quick and inexpensive way to up-armor your shelter.

In closing, Marshall has a special message to all of you in awareness who are feeling isolated and wondering if your awareness is a curse.  His message will give you hope, a renewed sense of purpose and a clear path to move forward.

In a live, predawn telecast on or about January 14, 2014, the morning news anchors of this NBC News affiliate, KCRA in Sacramento, CA aired live video from their own KCRA new helicopter. In it, they reported an observation of a planet they could not explain.

What our analyses showed is that the KCRA morning news team observed two planets via their live news helicopter feed: Venus eclipsing Nibiru.

Detailed explanations of the first three Planet X events projected for the tribulation time line are presented: covert visitations, deep impact, and the perihelion alignment of the Planet X system as it will be seen from Earth. These projections by the Guides appear in the book, Being In It for the Species The Universe Speaks.

Current Ring of Fire trends related to the Winter of Ash projection offered by the  Guides in Being In It for the Species The Universe Speaks. are shown along with the implications of this impending regional cataclysm and  how this event will affect each of us.

These projections for the Western Pacific are regional but global in terms of the consequences. These volcanic eruptions will herald the beginning of a tribulation timeline lasting years.

This update presents meteor observation data for January 2013 to September 2014, plus a comparison for 2010 and 2014. The conclusion presented in the trend analysis is that Earth has begun a cyclical transit of the outer rings of Nemesis, a brown dwarf star and companion to Sol, which is approaching the core of our solar system.

One consequence is that current trend data corroborates a near-future projected deep impact event as described in the book, Being In It for the Species The Universe Speaks.